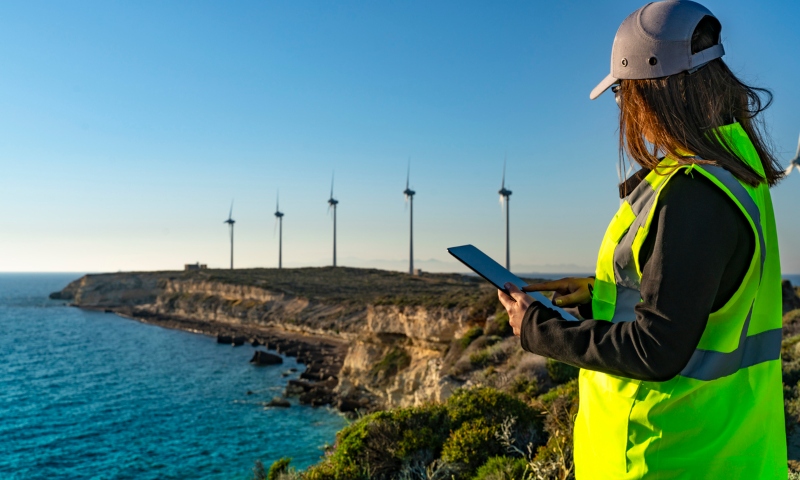 New York is well on its way to meeting its ambitious clean energy goals, according to one of the top state officials charged with implementation, and there are several major projects in the offing essential to moving from fossil fuels to a combination of wind, water, and solar power.

Doreen Harris, the president and CEO of the New York State Energy Research and Development Authority’s (NYSERDA), recently joined Gotham Gazette’s Max Politics podcast to discuss the state’s clean energy goals and the path to meeting them, including some of the largest opportunities and challenges in the way.

NYSERDA and the rest of state government, in partnership with local and federal governments and the private sector, must meet the goals laid out in New York’s landmark 2019 Climate Leadership and Community Protection Act. Per the CLCPA, New York must achieve a 40% reduction in greenhouse gas emissions by 2030 and a 85% greenhouse gas emission reduction by 2050, both relative to 1990 levels; and 100% zero-emission electricity across the state by 2040, with 70% renewable energy use by 2030.

“It sets a level of ambition that necessitates us to really think about every aspect of our economy very differently for the good,” Harris told podcast host Ben Max, editor of Gotham Gazette, of the CLCPA. “Both for our health, our climate and also our economy. It comes down to a fundamental shift in a lot of ways that we live and work.”

Harris explained in some detail what it means to green “the grid,” how New York is working to green its overall energy infrastructure, as well as reduce carbon emissions from the two major emitting sectors of buildings and transportation, several key renewable energy projects in the works, obstacles in New York’s road to a clean energy future, and more.

First asked to shed some light on NYSERDA, a public benefit corporation under the direction of the Governor, Harris explained that it has been a part of the state’s energy ecosystem since the 1970s, originally focused on innovation, and has expanded dramatically over the last decade into a leading force behind New York’s climate and clean energy goals. NYSERDA, Harris explained, is the state’s energy office, required to follow certain regulations and charged not only with planning ahead for New York’s energy future but also implementation, including funding and contracting major projects.

Together with State Department of Environmental Conservation Commissioner Basil Seggos, Harris is also co-chair of the New York Climate Action Council, the new body tasked directly with charting the path to meet the goals laid out in the CLCPA, much of which runs through NYSERDA and/or DEC.

“The good news is that the benefits from jobs, health, greenhouse gas perspectives and beyond, far surpass the costs,” Harris said when asked about whether the state will have enough funding to make the necessary transitions.

The private sector is a major player on the field, Harris explained, including via off-shore wind and other clean energy projects, like two planned pipeline projects that will bring clean energy from Upstate New York or Canada to the New York City area.

“The governor’s agenda for this year is very notable because of its investments, including a legislative agenda and regulation to get from here to there. We’re in a moment where we have a huge opportunity for federal leverage and we intend to take maximum benefit from that,” Harris said of Governor Kathy Hochul, a Democrat who in January presented her policy agenda for the year as well as her Executive Budget plan.

According to Harris, New York is currently getting 27% of its electricity from renewable sources, especially from Upstate wind and solar farms, and based only on contracts NYSERDA has already inked, is on track to reach 63% by 2030. “We’re actually well on our way. We see a future where our grid is powered by the sun and powered by water and powered by wind. We have a very significant pipeline of projects ready to deliver that objective,” said Harris.

Harris noted several key projects and factors in New York meeting its objectives, including that the state’s transportation sector is already relatively energy efficient given the size and scope of the New York City subway system, and she touted efforts to green buildings, in part through appliances. The governor is also looking to replicate statewide a ban on new gas hook-ups that New York City recently passed and goes into effect in the coming years.

“The near-term options that we have available to reduce gas utilization, most notably, would be to electrify,” Harris explained. “To electrify our cars, to electrify our homes, to electrify our buildings, etc. And so, if you are going to rely, in the near-term, on electrification, you need a grid that is clean and renewable to deliver those attributes to, as I said, homes and businesses and beyond.”

In roughly two decades, Harris noted, NYSERDA’s analysis shows that New York’s peak energy demand is likely to double. While the present peak lies in the summer— during the hottest months in which air conditioning use is extremely high — NYSERDA estimates that the peak is slowly shifting to the winter months for heating, more so than now. The key to moving ahead on the state’s clean energy goals while accounting for increased energy use is the major projects in the works and creating a more resilient energy grid powered with several types of renewable energy.

Asked about taking the impacts of climate change into account in planning for using renewable energy sources that depend on the climate and weather, Harris acknowledged there are risks, but said that NYSERDA and others have studied how reliable wind, solar, and hydro power will be, and that there is high confidence in their long-term dependability.

“We need to plan accordingly, and not only from a study perspective but also a design perspective. We need a resilient grid,” said Harris, who stressed the importance of a balance of approaches, from Canadian hydro-power to Upstate solar power to wind power from off the coast of Long Island.

Still, the Indian Point nuclear power plant was permanently shut down last year after 59 years of operation, following decades of protests over safety concerns but the immediate impact of making the city rely more on dirty energy. On the podcast, Harris defended the decision on safety grounds, but declined to discuss the Indian Point shutdown decision, which was driven by former Governor Andrew Cuomo and activists like Riverkeeper, at any length.

Harris was much more eager to discuss the fall “Climate Week” announcements made by Governor Hochul of awards for the Clean Path New York Project and Champlain Hudson Power Express Project. The projects will be build new clean energy transmission lines into the New York City area, delivering hydro and wind power from Upstate New York and Canada. Harris also touted plans for a large offshore wind farm off the coast of Long Island, with federal permits coming through for that. All together, Harris predicts this will eventually account for a third of New York’s energy supply.

Permits and other pieces of the puzzle are yet to come, from relevant New York and Canadian entities, but Harris expressed optimism. “It’s a really big deal,” Harris said. “The situation is bolstered by New York City’s strong commitment to actually purchase a portion of those projects [so as] to power their own operations via renewables as well.”

Join The Good Men Project as a Premium Member today.

All Premium Members get to view The Good Men Project with NO ADS.

Log in if you wish to renew an existing subscription.

By completing this registration form, you are also agreeing to our Terms of Service which can be found here.


Need more info? A complete list of benefits is here.

The post ‘A Fundamental Shift’ appeared first on The Good Men Project.