A growing number of scientists concur: The climate crisis cannot be effectively addressed without a major reduction in global meat consumption. That may be why a recent announcement from Canadas largest meat company caught some by surprise.

In November, Maple Leaf Foods announced that it was carbon neutral. The company, which owns 18 brands of pork and poultry products, also said it was setting science-based targets to reduce its emissions by 30 percent by 2030.

While the company has received press coverage hailing its bold climate commitments, a closer look raises important questions about the claim, and what it means more broadly to claim carbon neutrality.

Much of the recent debate surrounding animal agriculture and climate change has focused on whether grazing animals in pastured systems can sequester carbon to a degree that reduces meats overall emissions. But Maple Leaf is taking a different tack in arguing that the environmental damage done by factory farming can be counteracted with strategic investments.

As a large global meat company, we recognize that were part of this big global problem that we face in society, and we want to be part of the solution, Randy Huffman, Maple Leafs chief food safety and sustainability officer, told Civil Eats. And weve done enough work in this to know that meat can be produced more sustainably.

Maple Leaf is primarily a meat processing company, and while it is offsetting emissions from company operationssuch as its electricity use and transportationmost of the emissions created in the act of raising and feeding the animals are not included in the calculation.

The company has committed to reducing some emissions in its animal agriculture supply chain, but its targets for reducing its largest source of emissions are weaker. The way its established those targets would allow its overall emissions to grow if its business grows as welland concrete plans on how to make those operations more climate-friendly dont yet exist.

Maple Leaf Foods annual revenue in 2018 was more than $2.6 billion, and the majority of its sales appear to be of pork and chicken products made from animals raised in concentrated animal feeding operations (CAFOs). These systems are known for being carbon intensive (although they have a smaller footprint than beef and dairy CAFOs) and for various other negative environmental impacts, including local air and water pollution from animal waste.

This is a greenwashing effort top to bottom, as far as Im concerned, said Andrew deCoriolis, executive director of Farm Forward. DeCoriolis was initially intrigued to see Maple Leaf taking the climate crisis seriously; then he dug into information on the companys practices and promises. Their farms and production methods are going to be huge emitters of greenhouse gases, he says, noting that those largely fall outside the scope of Maple Leafs commitments.

Sujatha Bergen, the director of health campaigns at the National Resources Defense Council (NRDC), was less critical. The fact that the company is acknowledging the issue and that it was using science-based metrics to create a plan gives her some hope. Its also great that they arent using the fact that beef is a bigger emitter [than pork or poultry] to let themselves off the hook, she said. Thats not something that all companies are doing, so I think they do deserve lots of credit.

To achieve carbon neutrality, Maple Leaf says it has invested in significant environmental projects, including wind and solar farms, waste diversion, and reforesting. Those projects provide carbon offsets, which are designed to nullify a companys impact by reducing emissions elsewhere.

But theres a caveat. Greenhouse gas emissions generated by companies are divided into three categories: scope 1, 2, and 3. Scope 1 emissions come from in-house operations such as gas boilers in warehouses and company vehicles. Scope 2 emissions come from energy purchased and used by the company. And scope 3 emissions come from activities related to the business that are outside of a companys ownership, such as within its supply chain.

The most climate intensive aspects of Maple Leafs business all fall into scope 3, because Maple Leaf owns none of the feed or chicken farms related to its chicken brand and owns only 40 percent of its hog farms. That means much of the emissions meat production is known for, such as the fertilizer used in producing the grains that feed the animals, the enteric methane produced by the animals themselves, and manure emissions, all fall into that category. This matters because the carbon neutral claim does not cover a large portion of those emissions.

However, Huffman emphasized that the company is not just relying on offsets, and that making operations more efficient and reducing onsite emissions at their facilities was the first priority.

Thats where the targets for reducing emissions come in. And while the companys targets do extend to some parts of the supply chain, the target that applies to scope 3 emissions is much weaker.

And that scenario is entirely likely, given recent history. While U.S. Environmental Protection Agency (EPA) data released earlier this year showed that greenhouse gas emissions have dropped in the U.S. since 1990 in some sectors, emissions from agriculture have increased by more than 10 percent. The largest proportion of those emissions come from agricultural soil management, which includes nitrous oxide from synthetic fertilizers.

These are more than likely being used to grow the large quantities of corn and soy being used to feed the chickens and hogs that Maple Leaf processes. The release of methane from hog manure lagoons has also increased 29 percent since 1990, as hog production all over the U.S. shifted from smaller operations to large confined systems.

That environmental data is based on agriculture in the U.S., but Canadas systems are very similar. And Maple Leafs own 2018sustainability reportsupports the fact that more emissions are likely to come from this part of its operations. A life-cycle analysis of Maple Leaf bacon (shown below) illustrates the majority of the products climate impact is concentrated at the beginning of the supply chain in feed production and pig raising. 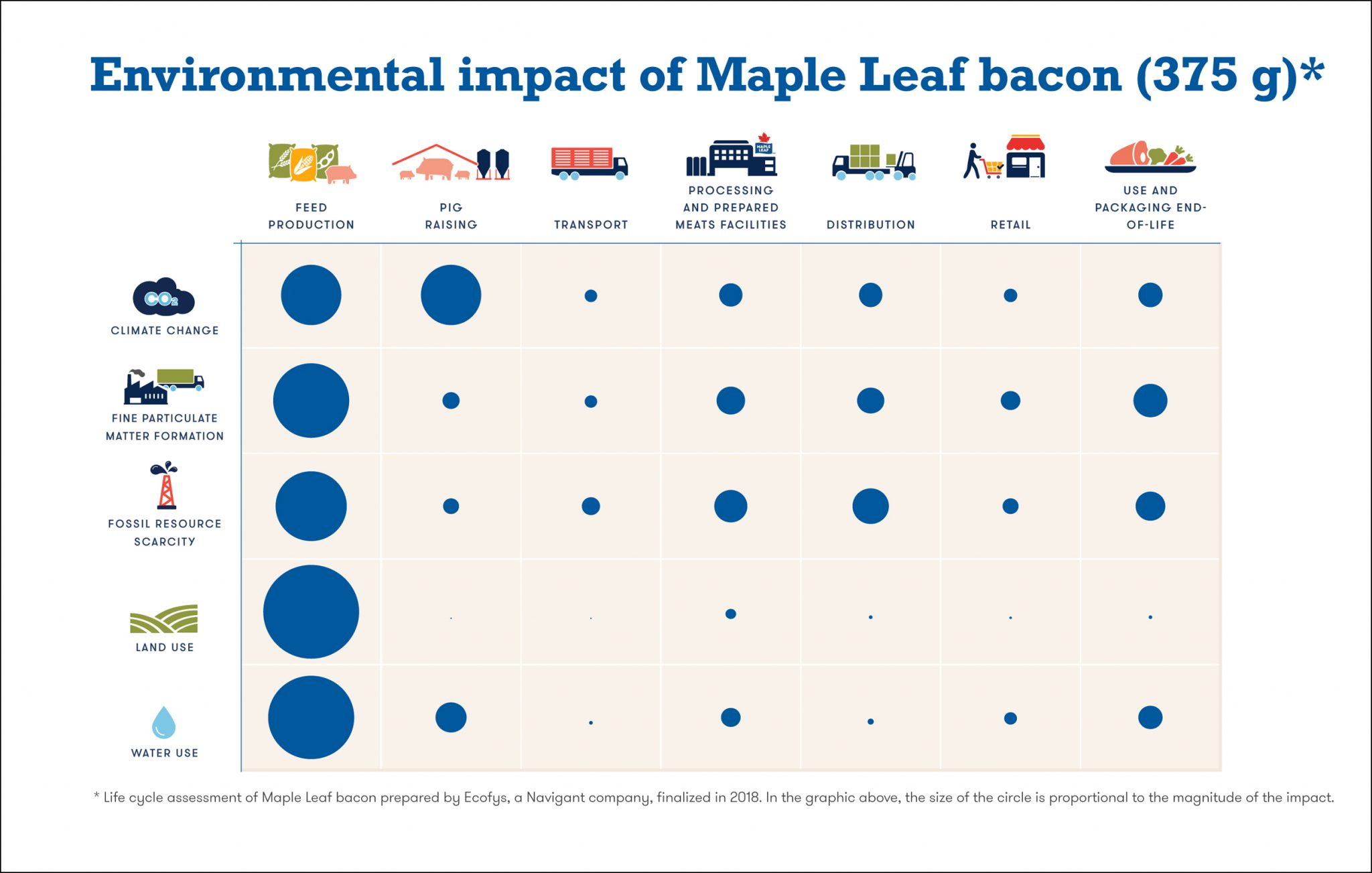 And yet, the 14.3 percent overall reduction in emissions included in the same report and cited in the recent announcement as a measure of progress so far does not include feed or manure-related emissions.

Theyre a pig company, and theyre looking at the climate emissions from their offices and trucking? deCoriolis said. A serious commitment to this would have included a discussion about the inherent climate intensity of raising hogs in confinement.

Maple Leafs Huffman points to the fact that the 2018 report is now out of date and the new science-based targets do include feed and manure, as will the 2019 report when its published. When asked about how the company plans to make its supply chain more climate-friendly, he talked about the potential of building soil health on the farms that grow feed, better manure management, and systems that capture methane, but had no examples of initiatives in this realm to share yet.

We have a lot of enthusiasm for working with our supply chain to find ways to reduce emissions. We certainly arent at the point yet to say that we know exactly how that will look, said Huffman.

Like Tyson, Smithfield, Perdue, and Hormel, Maple Leaf is actively working to build its portfolio of plant-based meat alternatives. The company purchased Lightlife and Field Roast, and recently invested $300 million in building a new facility in Indiana dedicated to plant-based proteins. Were investing heavily in that space as well because we believe that can be part of a sustainable diet, Huffman said. We purposely use the term proteinnot meatcompany.

A recent report by the FAIRR Initiative, a collaborative investor network that raises awareness of the material ESG risks and opportunities caused by intensive animal production, looked at sustainability risks that major meat and dairy companies face. It included Maple Leaf in its high-risk category, and noted the companys lack of focus on manure management, although the report did note that the company leads the sector on plans to diversify protein sources.

NRDCs Bergen is excited about that aspect of their business, but said to make it really meaningful, the company will also have to convince its consumer base to buy more plant-based products. They should be marketing that aggressively, and really encouraging meat eaters to try these new, exciting foods.

FarmForwards deCoriolis suggested that he might take the effort seriously if the company started paying its growers more to produce meat from animals fed grains grown using a regenerative model that locks carbon in the soil, and removes it from the atmosphere. By doing so, he says, they could put outcome-based measures on soil carbon.

And yet, changes to the supply chain at that scale would undoubtedly increase the cost of production, and, so far, such a move is unprecedented among large meat companies. Its been a part of this kind of production for a long time to externalize costs, says deCoriolis.

The post Can an Industrial-Scale Meat Company Be Carbon Neutral? appeared first on Civil Eats.

53 Thought-Provoking Photographs, As Shared By The Environmental Photographer Of The Year 2022 Competition
Feb 03, 2023

Teasing out the secret recipes for mummification in ancient Egypt
Feb 01, 2023