It's day 47 of our self quarantined stint. Sometimes it may feel like forever. Other times it feels like it's our normal routine at home, and we are only limited by not going out shopping or hugging our grandchildren. But we can cope with it for a while longer, if it means remaining virus free and healthy.

Can you believe today is our ONE YEAR ANNIVERSARY of selling our home in Chilton and buying this one in Oconto... all in ONE DAY?? Whew. We had a lot of money come in during the morning, and then we had a lot of money go right back out again a few hours later.
But it sure was worth it! 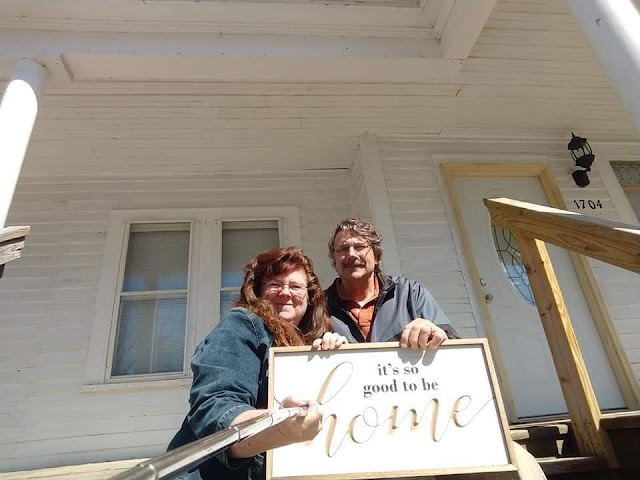 Here is the house as it was when we bought it: 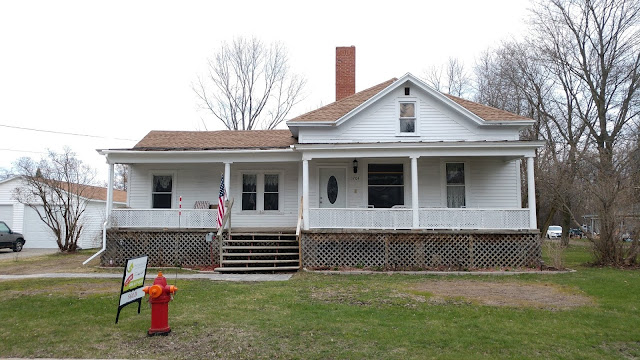 and here it is today! 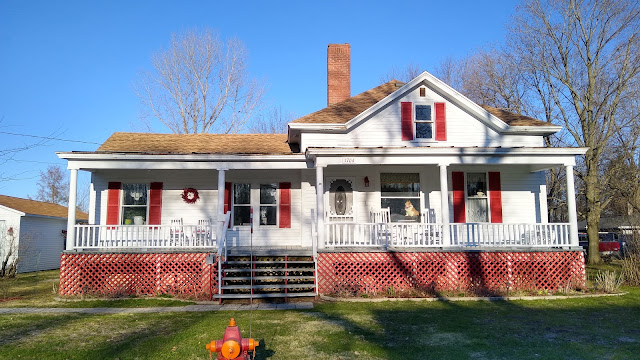 We messed around the house for a little while this morning, and Steve exercised the generator on the motorhome. It needs to be done monthly to keep it in tip-top shape. He fires it up and then turns on some high usage appliances inside to create a draw for a while and exercise it. He ran the microwave for a little bit with a cup of water in it. Then he turned on an electric heater for a while. Then the roof air conditioners.  It's good to run a few things at a time to really put it through it's paces.

While we sat out there in the rig, we kind of took an inventory of things we need to replenish and restock before our first camping trip. Most everything stays in there except for perishables or things that might freeze. Even the clothes and bedding and towels all stay out there. No damage over the winter, and no intrusion of mice or insects. While parked in the yard, we keep two of the Victor electronic Mouse repellent units suspended on a electric cord underneath the motor home for the winter months. 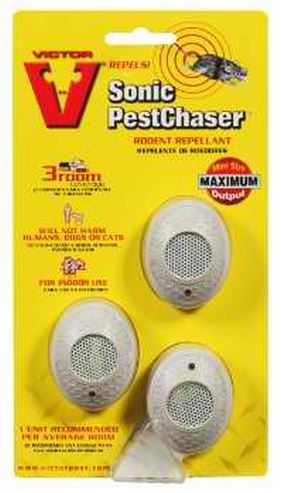 One facing forward and one facing rearward hanging down from the chassis. It keeps the mice out for sure, and other rodents like squirrels or chipmunks as well.

They are only good for about five years of use, so we write the date on them so we know when it's time to replenish with new ones. We also keep them in our garage and then our house on the main floor, the attic, and the basement.

~~~~~~~
About 11 a.m. we had the delightful opportunity of having two little munchkins come over to socially distance and do some work for us.

Chelsea and Clayton who are 10 and 8, road over on their bicycle and scooter respectively to spend a couple hours at our house outside.

We kept our 6-foot distance and put them to work.

The first job was for Clayton, the badger, to crawl underneath our front porch through the little triangular access hole on the side of the stairs. While under there he removed all of the loose bricks, stones, and pieces of broken cement that have accumulated over the years underneath the porch behind the lattice. 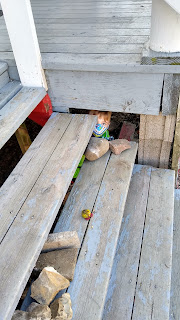 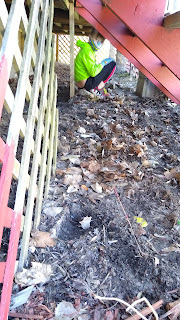 He worked so hard and pulled all of the blocks and bricks through the spaces to set on the steps. 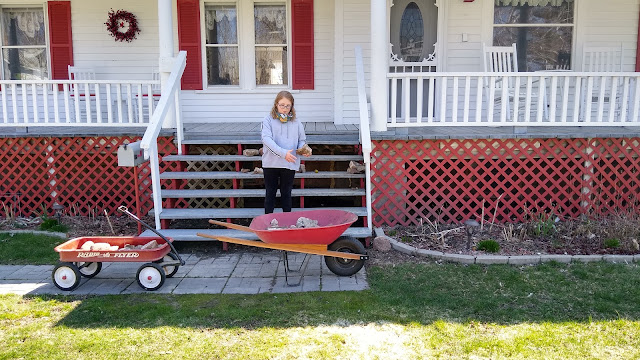 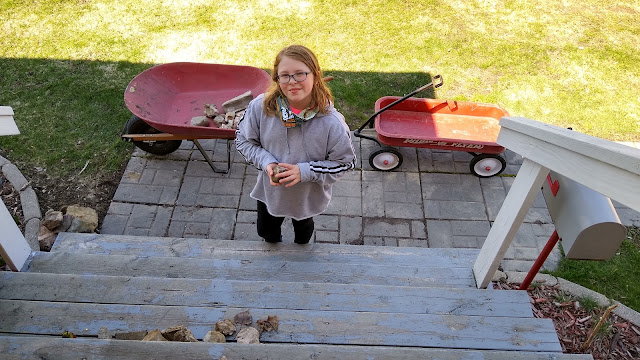 Once they were done, it was time to wheel away the product of their work. Chelsea's wagon went to the side of the she shed to become rocks for the flower garden. 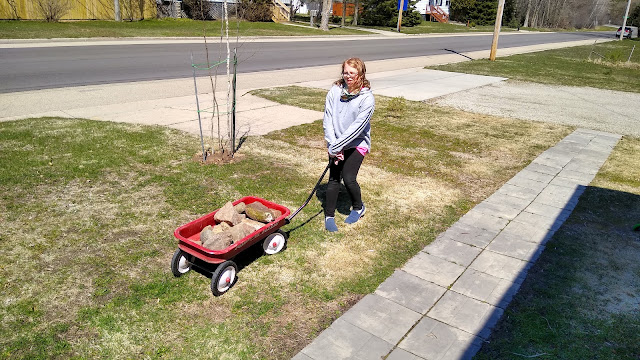 Clayton's very heavy load of broken bricks and cement pieces were loaded into the back end of the tracker to be hauled away to the city's municipal recycling yard. 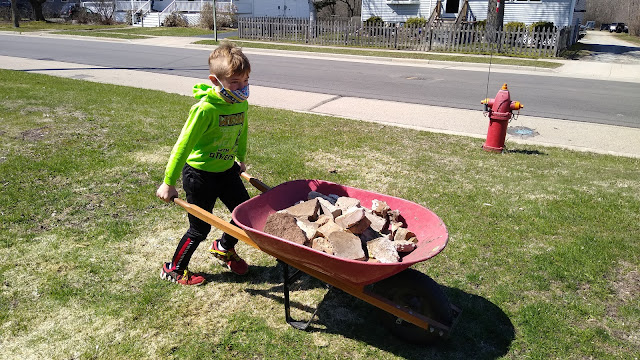 They took a break for a little snack on the front porch. I left the snack out there in advance, set by their two chairs. Then we went and sat on the other end of the porch in our rockers while they enjoyed their snacks. 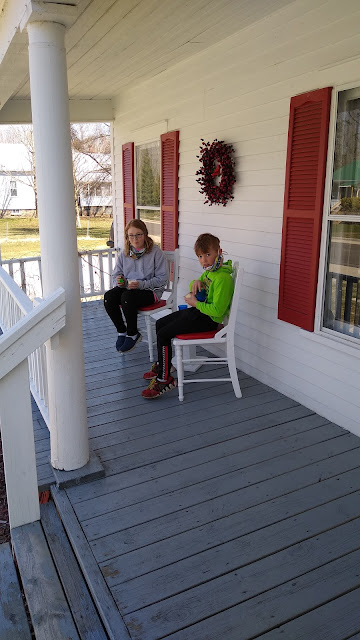 When snack time was over, they went to work on the flower garden. I marked where there would be perennial plants coming up with little sticks. They arranged clusters of the newly unearthed rocks into beautiful art in the flower garden. 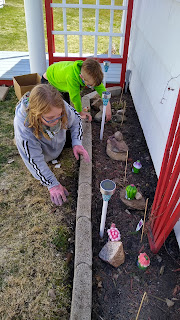 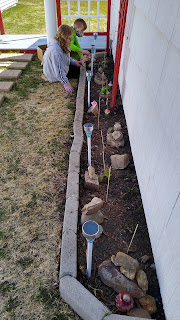 Back in January, before all this virus stuff hit, the kids had been shopping with me in the Dollar tree store. They picked out an assortment of little fairy houses, garden gnomes, and froggies and turtles to set out in a beautiful little array in the flower bed. 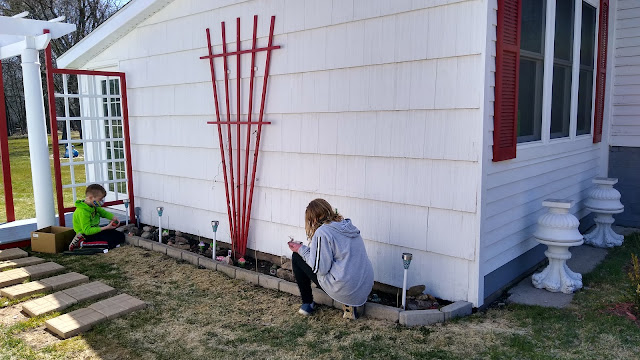 They worked so hard in determining what got put where, and they rearranged it a number of times before they were satisfied with their final presentation. 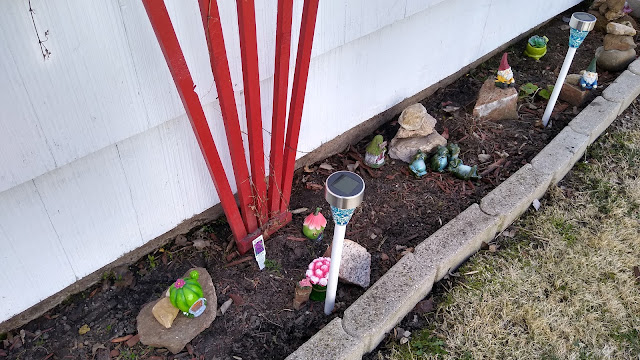 I am sure when the other grandchildren come to visit, they will rearrange them again and again.  They can help to plant some annual flowers too. 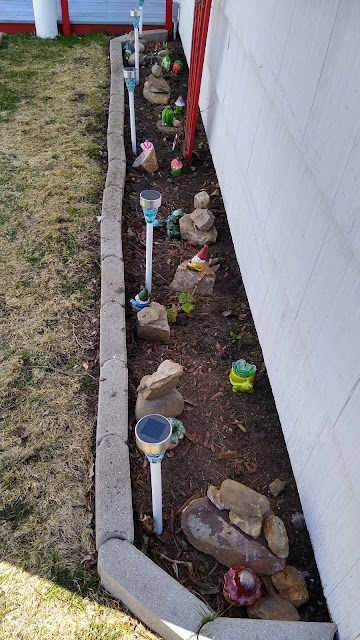 It will be considered the
"Grandchildren's Flower Garden".

---and it will keep them out of
the rest of my flower gardens
that are around the house!


Once that was done, we then headed out for a walk, being properly socially distanced 6 feet apart through the big backyard. The dogs were along with us and Steve brought the leashes so we could hook them up and walk around through the nature preserve. 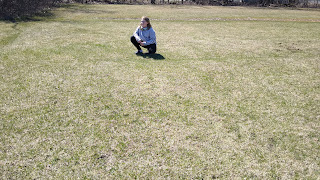 Behind our house is a large tract of land owned by the Northeast Wisconsin Land Trust. We are welcome to walk back there on the trails and the land that adjoins to the Wisconsin DNR's Green Bay West Shore Wildlife Area Marsh as well.

We walked around with the kids and came up on the old barn foundation from a farm a long time ago. The barn had burnt down but the cement walls are left behind with all of the little square shapes where the windows had been at one time. 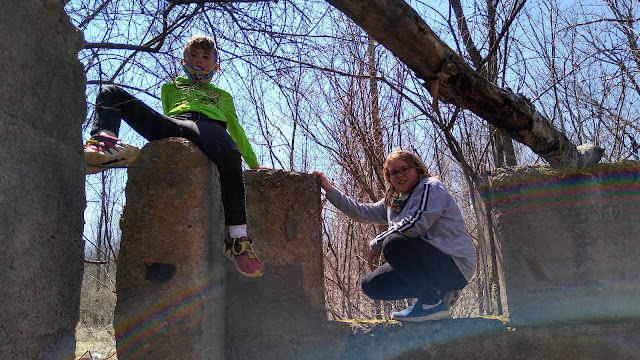 The kids decided it was not a barn, it was a CASTLE! Because it had the up and down square-shaped fortress shapes, just like a castle. Makes sense to me! 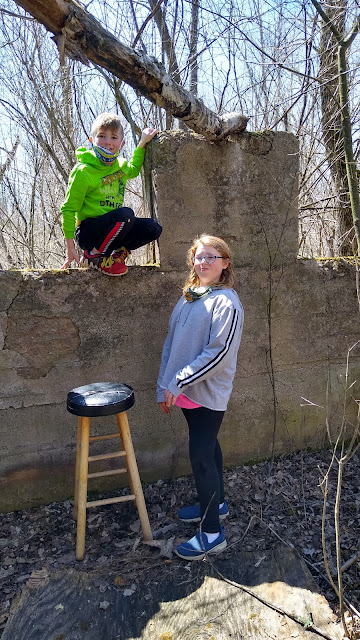 They crawled around for a while, exploring the place. Someone had left a stool there that I think they were using it as a hunting blind to watch for deer.

We saw two snakes on our walk and Clayton found a beautiful big feather, I think from a turkey.  He came up with a brilliant idea. 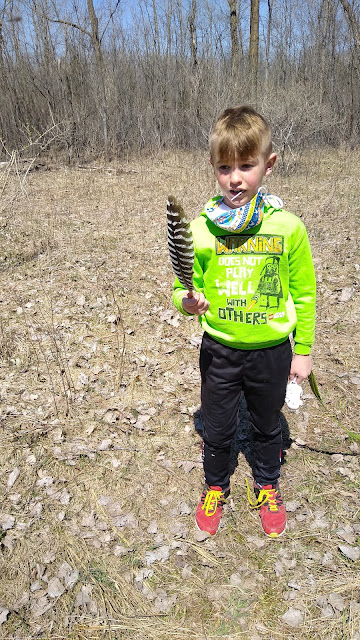 From one turkey to another grandpa says...
We wandered all the way back through the overgrown farmstead and around the big pond. It was a delightful way to spend the afternoon and work up an appetite. 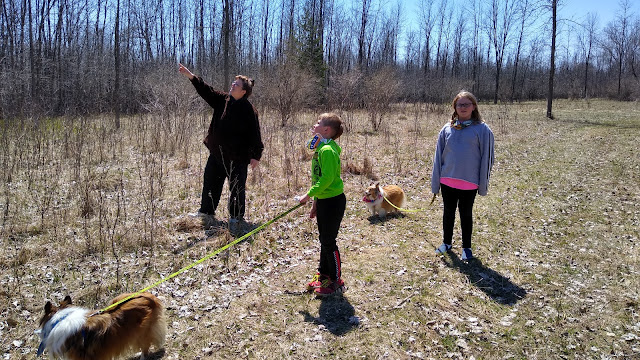 When we got back to the house, while I was making a lunch inside, Clayton was determined to turn his turkey feather into a quill pen!

He borrowed a pliers from Grandpa, and then later used a scissors. He cut the end off, a little bit at a time, until the opening was wide enough to accept an insert of a ballpoint pen! Used a little bit of tape to hold it into place. 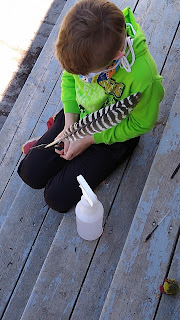 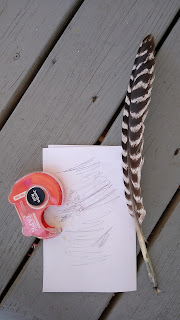 Pretty smart, hey?
He was very pleased with his creation.
I brought lunch out to the front porch, I put the kids' food down to there end, and our food over to our side by the rocking chairs. So we socially distanced our little lunch together and had a nice time visiting back and forth.

It's one thing to see each other on social media, doing our little FaceTime visits, or sending each other texts. But it's another thing to actually watch their silly expressions, see their great ideas evolve, and watch how excited they are to tell us about things that have been going on in their young lives.

We really miss the random chitter-chatter that these kids come up with. It was so enjoyable to spend some time with them.

We can't wait to spend some more time with all of our grandchildren.

53 Thought-Provoking Photographs, As Shared By The Environmental Photographer Of The Year 2022 Competition
Feb 03, 2023

Teasing out the secret recipes for mummification in ancient Egypt
Feb 01, 2023