Since the beginning of time, mankind has been fascinated by swords. These limb-slicing weapons have been used in countless wars across the ages. From the Bronze Age to Feudal Japan to the battlefields of World War II, swords have been ever present. While generally used in battle, there have also been many ornamental swords produced for ancient ceremonies and as gifts. Swords are also featured heavily in movies, TV series, and books. Whether it be an epic fantasy novel, a series about pirates or a film about Greek mythology, swords really are everywhere. As we all know, swords are lethal, but have you ever wondered what the deadliest sword in the world is?

It is a question that has stumped many, with hundreds of deadly swords made throughout the years. Shows such as Deadliest Swords in History have even attempted to answer this question but found it difficult to point to just one. So with the interest in sword culture still at a high, here are 12 of the deadliest swords ever made. 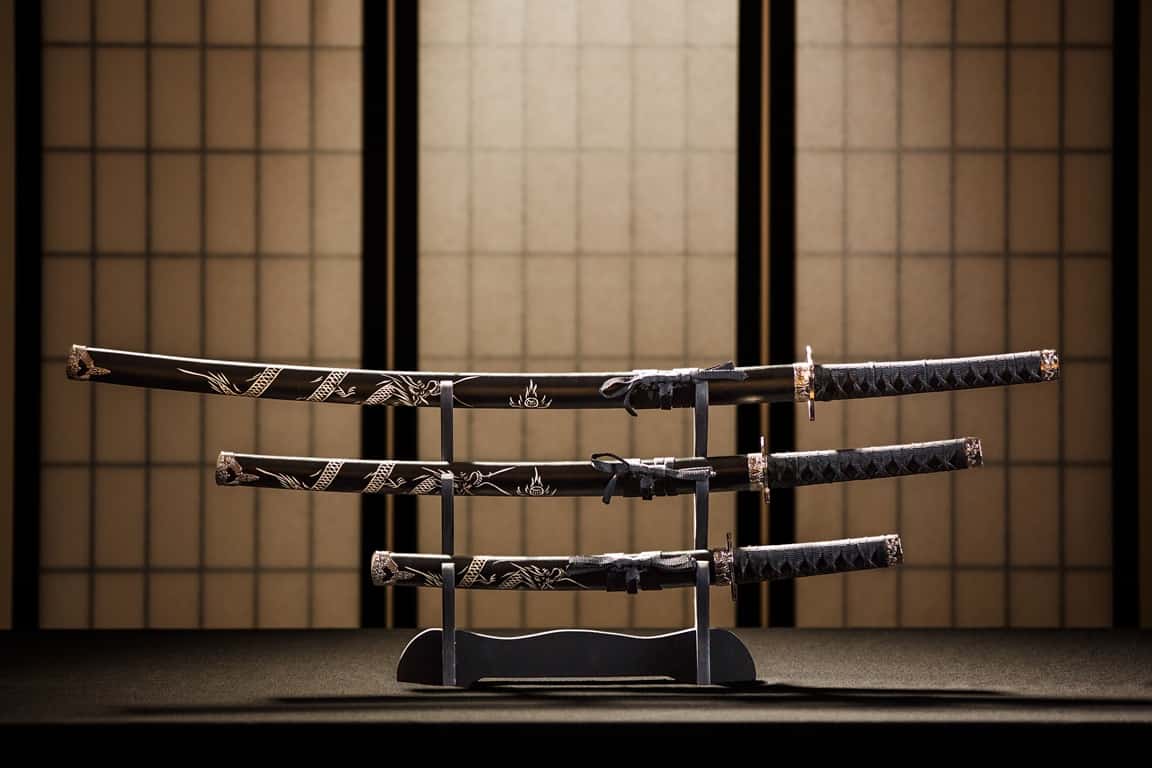 One of the most famous swords in the world is also one of the deadliest. The katana is a Japanese weapon inspired by the Chinese double-edged steel blade. What set this samurai sword apart from other swords is its curved, single-edged blade. It is thought Japanese wordsmith Amakuni was the man to first design the katana. He noticed that many warriors returned from war with broken swords and wanted to develop a weapon that would last the rigors of battle. What he came up with was the katana, a savage Japanese sword that can cut through anything and is nearly unbreakable. The story goes that Amakuni was granted immortality thanks to all the blood his blades shed. 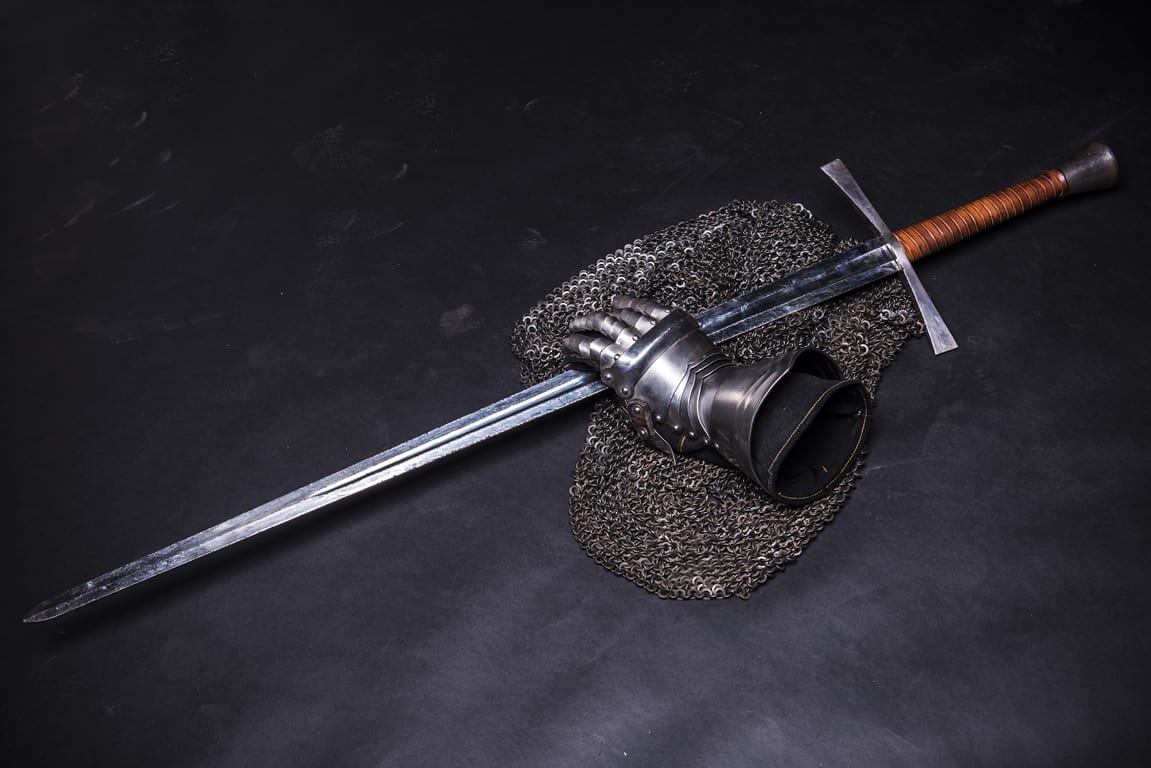 Along with being the finishing move of WWE wrestler Drew McIntyre, the claymore is a great Scottish blade. Crafted in the Scottish Highlands by clansmen, the claymore is a version of the long sword made popular in Europe. The first record of this legendary sword was recorded during the 15th century, but it is believed the Scots could have been fighting on the foothills with these weapons as early as the 12th century. These swords are double handled and feature a double blade, making them ideal for slicing through body parts. They are one of the sharpest sword creations from that time period. The claymore become famous around Europe thanks to Scottish freedom fighter William Wallace, who was a big fan of the weapon. 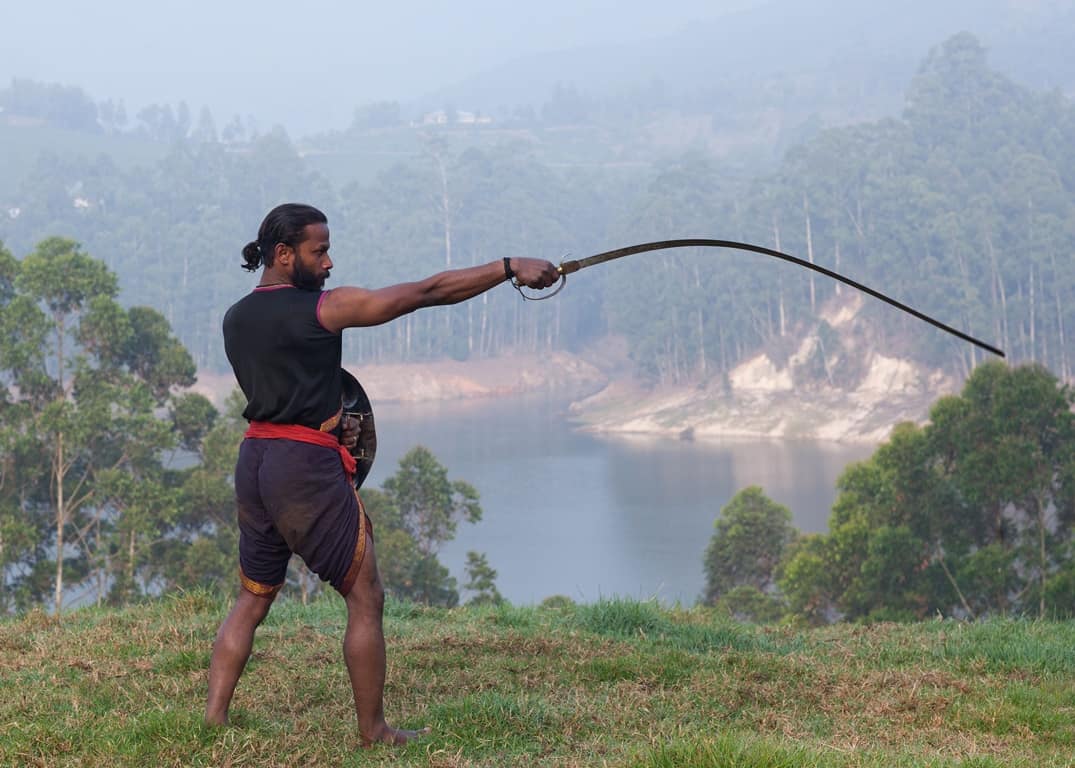 This unique sword was prevalent during the Mauryan dynasty of India (350-150 BC). Unlike a standard sword with one, straight steel blade, the urumi has multiple blades that act like a whip. It looks more like a cat of nine tails but is a very deadly sword that can do much damage. Wielding the blade is not easy either, which is the reason why it is the last discipline taught in Indian martial arts such as Kalaripayattu. There is a Sri Lankan version of the weapon that is even more deadly. This powerful weapon has a whooping 32 blades. Warriors who fight with the urumi usually have one in each hand, making for a deadly combination. 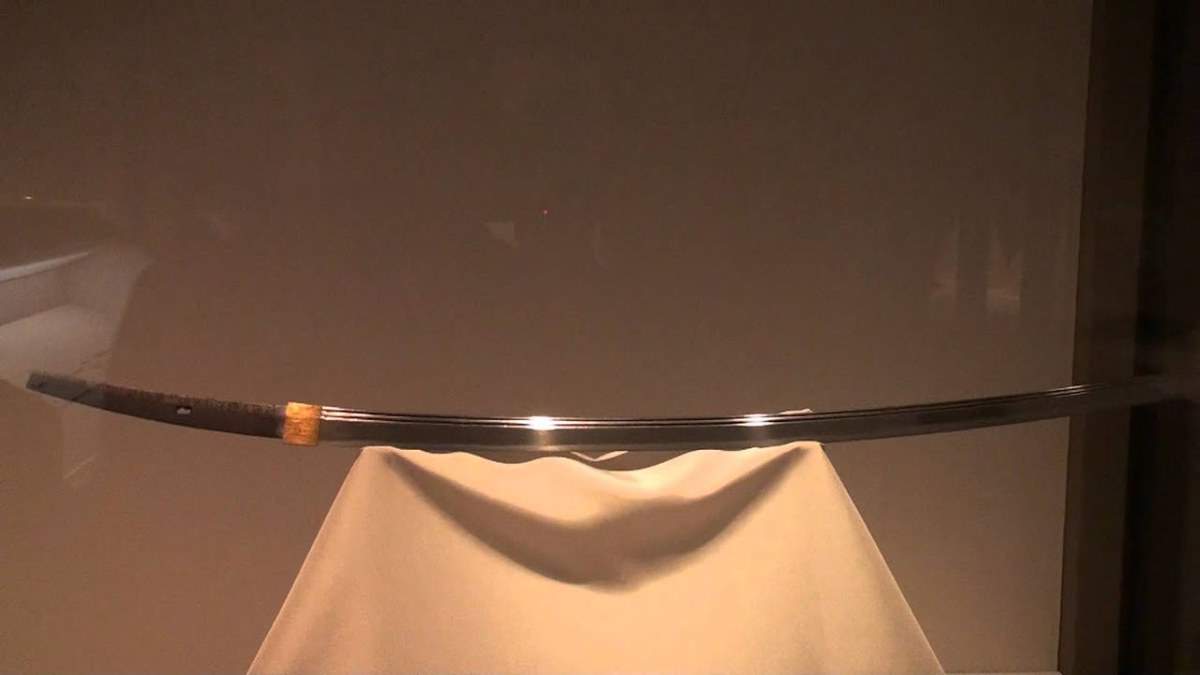 While this is a type of katana sword, it is well worth mentioning due to its influence on sword culture and the mythology behind it. Sengo Muramasa was a famous swordsmith from the 15th century. The swords he crafted were not only deadly weapons but beautiful works of art. A Muramasa blade was known for the unique designs etched onto the blade and the shape of the nakago, the area where the blade meets the handle. This could be the strongest sword on this list. 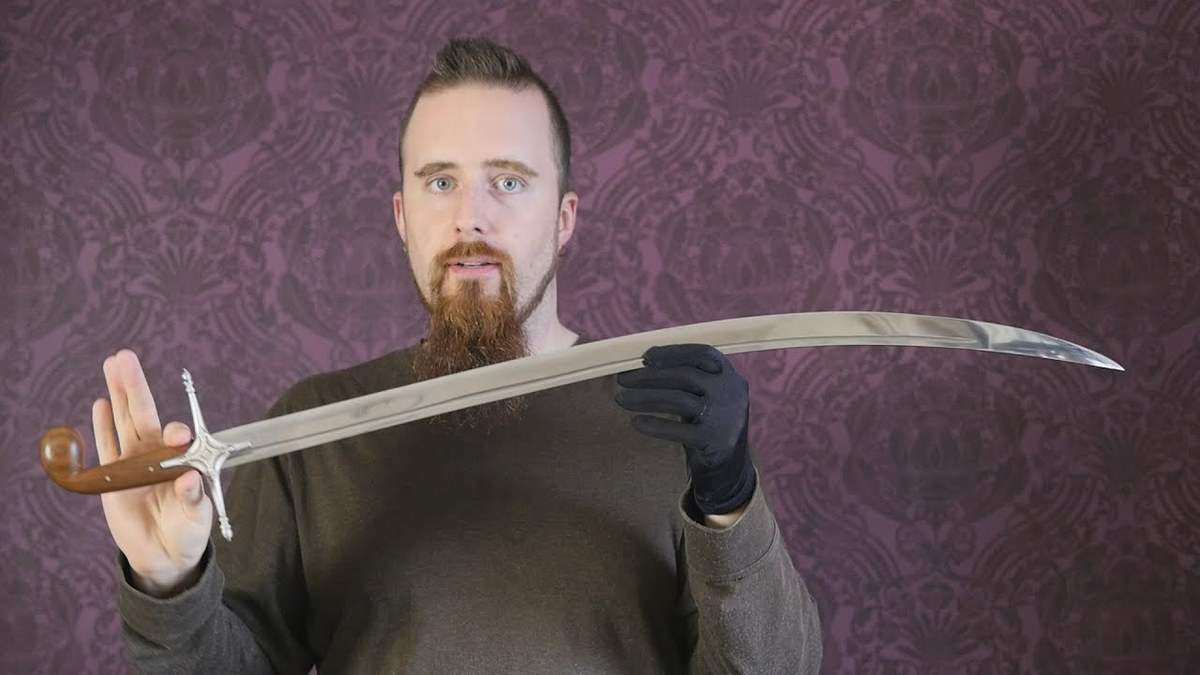 The name might not be familiar but you have no doubt seen this famous sword on the big screen. A scimitar is wielded by a villain in Indiana Jones and the Raiders of the Lost Ark. When approached by the hulking warrior, Indy pulls out his gun and shoots him dead. While a comical scene, the scimitar is no laughing matter. A single-edged sword originally used to describe swords from Asia, there are many different types of scimitar swords. They cover a variety of curved sabers from Middle Eastern, South Asian, and North African cultures. These swords have an eye-catching design, with the curved shape making it easier to cut through flesh and bone.

One of the most famous people to wield a scimitar was the great swordsman Saladin. He was the Muslim sultan of Egypt and Syria. He led his outnumbered army to a great victory over the Crusaders at the Battle of Hattin in 1187 when he captured the city of Jerusalem.

This traditional Chinese weapon was first used by martial art experts in the north of mainland China. While it is now more widespread, the Chinese hook sword remains an important part of Wushu weapons routines. What makes these swords so deadly is the hook end to the blade, along with the large guards around the handle. The blades of the hook sword are quite thick yet still extremely sharp. While deadly, there are no recordings of hook swords being used in combat. They are more of a decorative or competition blade. Even so, you wouldn’t want to find yourself on the pointy end of one of these blades.

See more about - Best Martial Arts Movies Of All Time 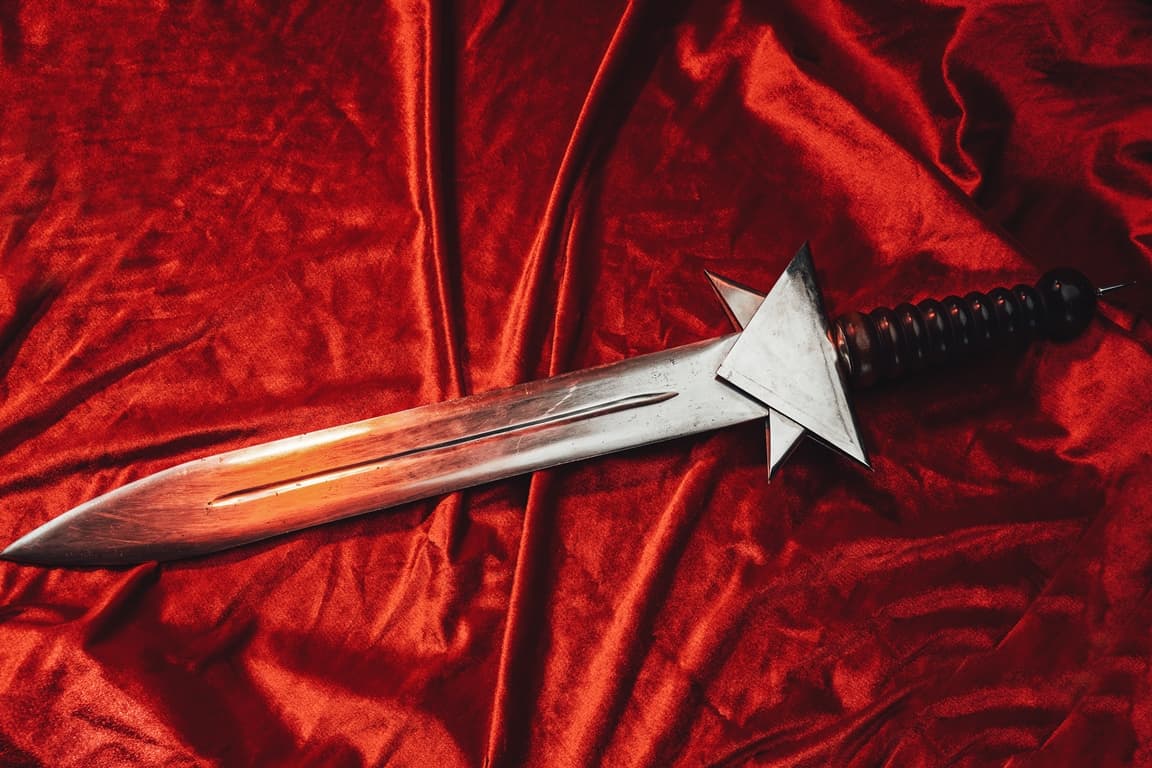 This was the sword favored by the Roman armies during the nation’s heyday. After discovering how effective the swords used by Hannibal’s army were at slashing and thrusting, the Romans adopted the sword design and crafted the gladius. Although capable of chopping an arm off, the gladius is mainly used as a thrusting weapon at close quarters. There were four main designs of the gladius during the 800 odd years the Roman army used them. Each had small variations to the shape and look of the blade, with the final version, Pompeii gladius, the shortest and straightest of the swords.

Many of these swords were owned by officers and those in high positions and had hilts adorned with jewels and other ornaments to show their status and rank.

Used from the 14th to the 17th century, this two-handed sword was a mainstay in Medieval Europe. A variation of the classic longsword, the estoc is not only long but has no blade edges, just a point at the end. So instead of slicing cleaning through flesh, this sword is more likely to hack body parts and even get lodged in an enemy’s torso. What they did do well is pierce chainmail and armor. The first attack would often stun while the second was more deadly and could maim. It is more of a thrusting sword, which makes sense considering estoc means ‘thrust’ in French.

The sword was also popular with hunters during the 15th century. While a sword isn’t the ideal weapon to use when trying to take down a bear, due to its power and sharp point it was able to penetrate an animal’s skin easily. 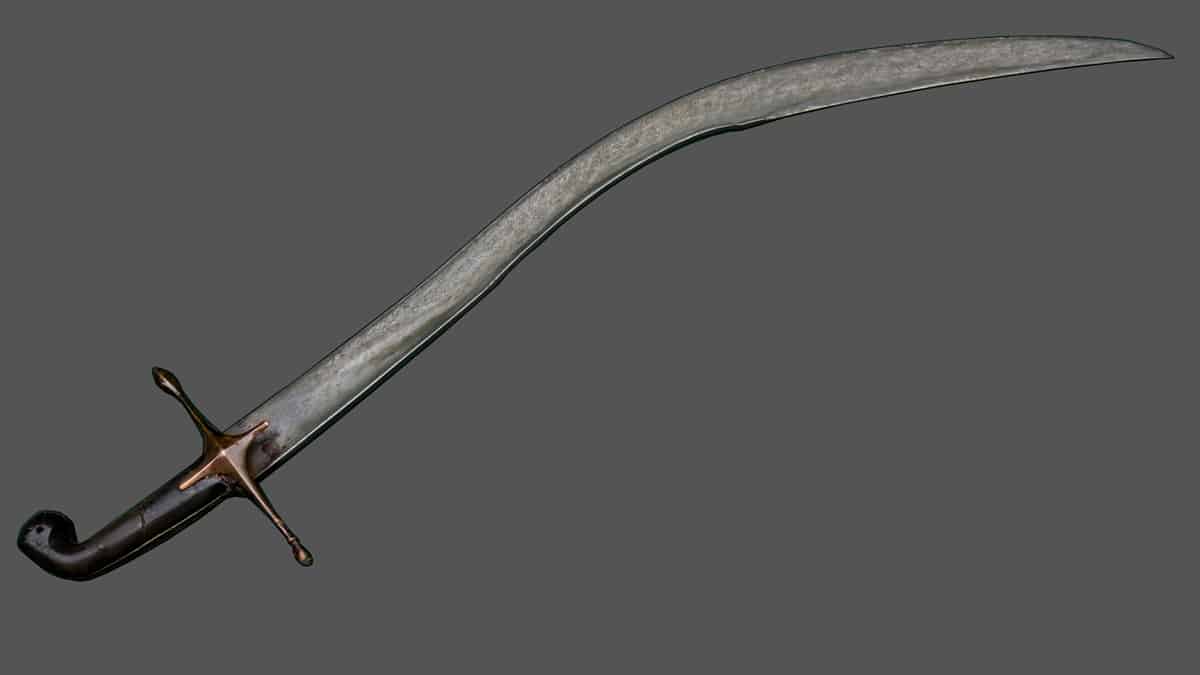 Kilij literally means ‘sword’ in Turkey. This single-edged sword was popular with Ottoman Turks, with the first recordings of the short sword being around the 15th century. While the blade of the Kilij is single-edged, the tip has a double edge, meaning it is much stronger and sterner than other variations. You can easily kill a man with one attack if used correctly.

The design of the sword was soon adapted by Central Asia before Europe also took notice. Light cavalry officers of both France and Britain were often seen with these swords at their side. They liked how it looked, which is something they had in common with the Turkish. The Turkish warriors also believed the sword made them look fearsome and gave them an edge in battle. 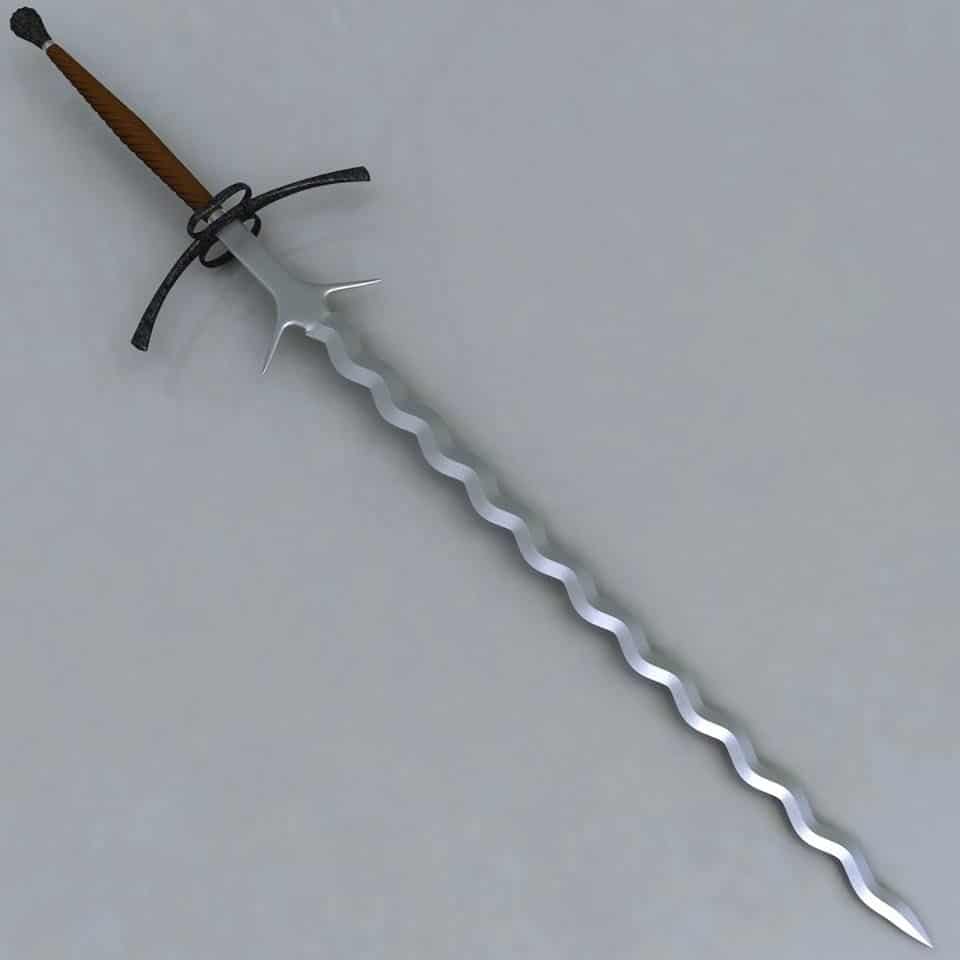 Of all the swords on this list, the flammard might have the wackiest design. While the wavey blade might look useless, it is actually very deadly. When thrust into someone, the wavey edges act like teeth and grind against the flesh when being pulled out. This causes much internal damage, with one decent thrust often enough to kill someone in battle. There are many variations of this sword throughout the ages, with German mercenaries in the 16th century the most well-known group of warriors to use them on the battlefield. 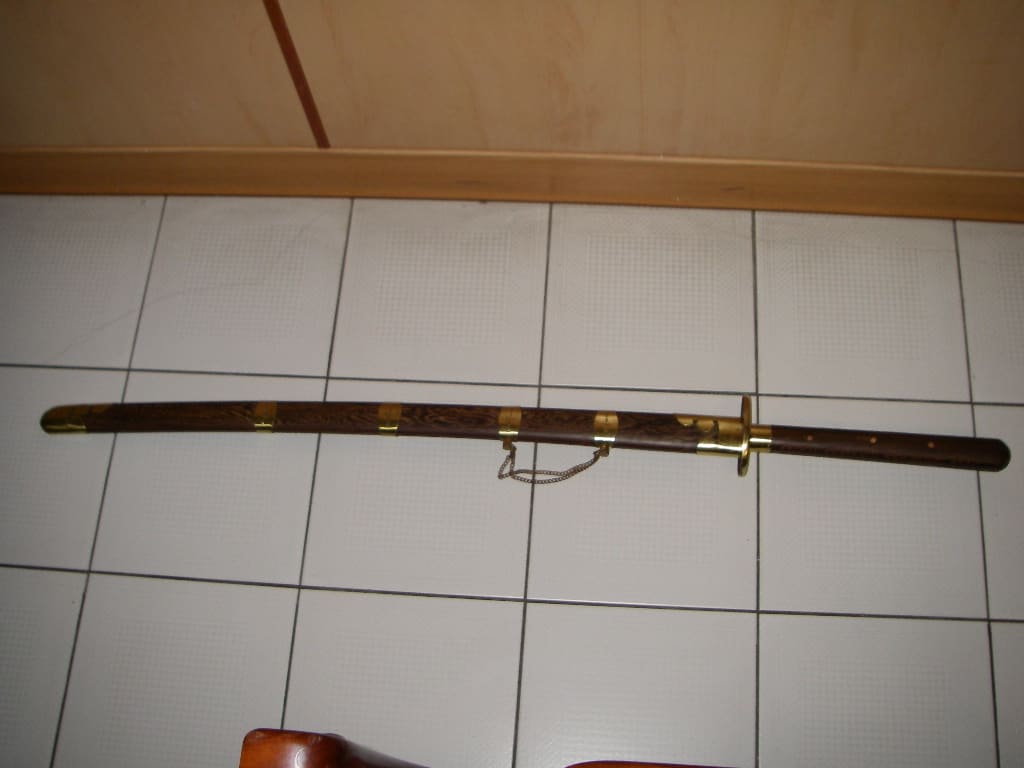 This narrow yet long sword was popular with Chinese swordsmen in past centuries. It has an unusually long hilt, meaning it can be wielded with two hands or one, giving the holder several options when it comes to fighting. The name of the sword, Miadao, means  ‘sprout saber,’ which was given to the sword due to the fact it resembles a newly sprouted plant. It could almost be called the world’s deadliest knife due to its size.

This sword was also taken on the battlefield by Chinese soldiers during World War II. While no match for the more modern swords used by the Japanese at that time, the miadao was great during close combat thanks to the ease at which it could be swung and thrust at enemies. 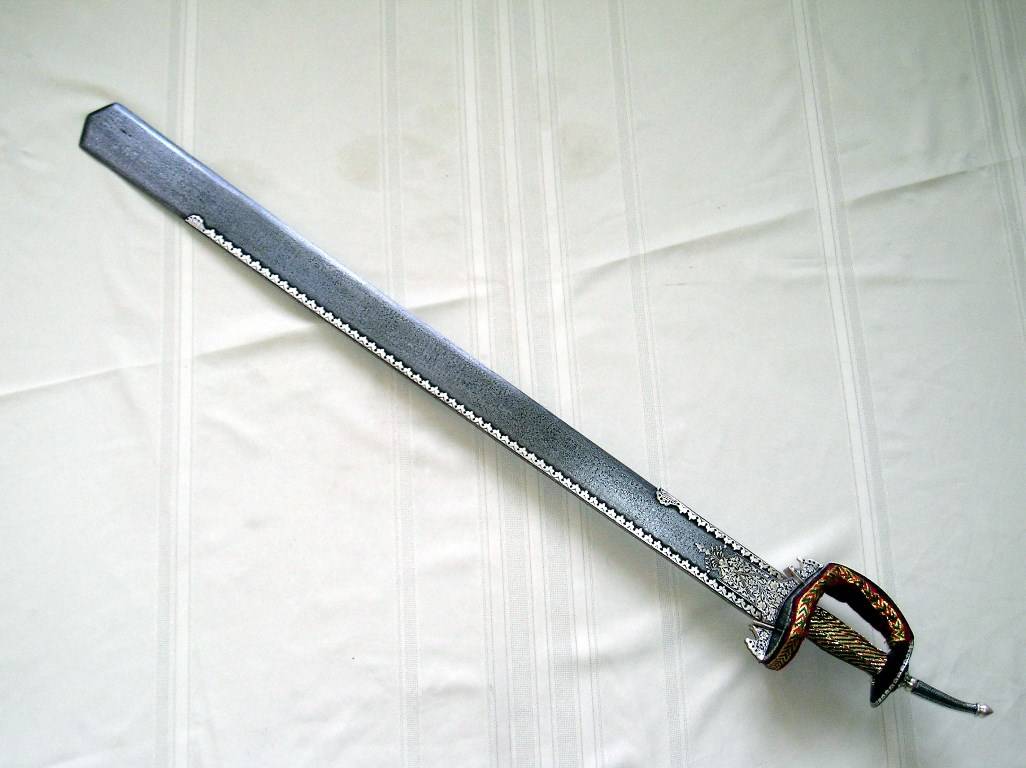 This thick, double-edged sword originated in the Indian subcontinent and is a common weapon used by Indian martial arts experts when sword fighting. The sword has a finger guard and a broad blade that is blunt at the tip but shape on the sides. It’s got a bit of weight to it, so requires a bit more strength to swing than other swords. The basket hilt was also the inspiration for similar constructed European weapons, illustrating the importance of this weapon.

This is a very prestigious weapon that often features religious iconography engraved into the blade and hilt. The khanda is a sign of bravery and was wielded by several famous Sikh warriors, including the great Baba Deep Singh who died with a khanda in his hand. That sword is now held at the Akal Takht Sahib, one of five takhts of the Sikhs.

The post What Is the Deadliest Sword in the World? appeared first on Next Luxury.